I've been looking into natural and/or homemade deodorants for awhile now...reading reviews and comments from people who have bought/made them, trying to find information about commercial deodorants and the effects of their ingredients. I still don't feel like a have a real handle on that, but I'm trying to head towards more natural products for our family. I tried a few different recipes for homemade deodorant which either didn't work, or did work but smelled bad/funny. I wanted to find something that was natural, but still WORKED and DIDN'T make me smell funny. :) I know, I know...that's asking a lot. But I finally found one that seems to fit the bill! I adjusted the recipe slightly, but the original recipe is as follows:

I made this recipe just as given above, using extra virgin coconut oil. I found I really didn't like the smell of that oil (I'm not a big coconut fan) and every deodorant I've tried with tea tree oil has really bugged me...I just don't like that smell! However, the deodorant DID seem to work...so I decided to try the recipe again using my more refined coconut oil (cheaper, AND no smell) and omit the tea tree oil. Below is my adapted recipe. 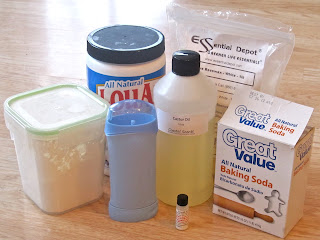 - 3 tablespoons arrowroot powder
(which I didn't have, so I substituted cornstarch instead...seems to work well!)
- 3 tablespoons baking soda
- 3 tablespoons coconut oil
- 1.5 tablespoons beeswax (grated or pellets)
- 10 20 drops essential oil or fragrance oil of your choice (optional)
- 3 drops castor oil for extra glide (optional) (UPDATE: Now that I've made this recipe several times, I'm adding about 1 teaspoon of castor oil. It gets rid  of the dry, itchy feeling I was dealing with at first. Just don't add too much more than that, or your deodorant won't harden well)
- Cleaned deodorant container (or whatever container you'd like to use) 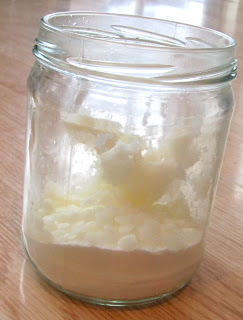 Put all ingredients except essential/fragrance oils into a small glass jar. 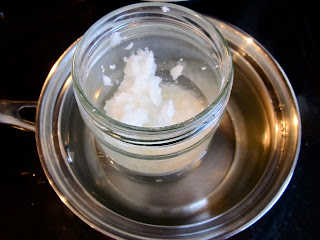 Place the jar in a small saucepan of boiling water...this acts as a double boiler. 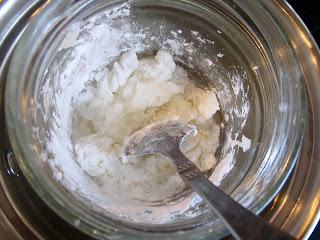 Mix up the ingredients as well as possible...this will get easier as they start to melt. :) 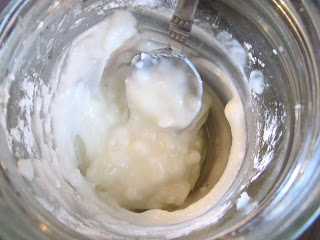 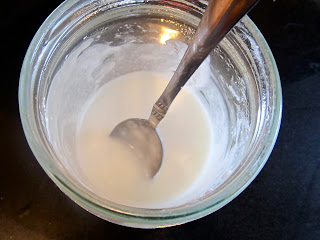 ...until everything is smooth and melted. :) 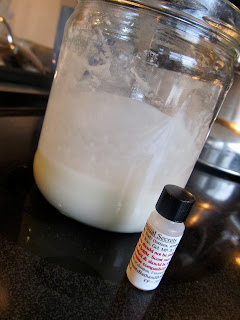 Remove from the hot water and add essential or fragrance oils. I usually use essential oils in things because they're natural and good for you....but this time I used a fragrance oil from Elements Bath & Body. I know it's synthetic, but I wanted a really good smelling deodorant so I fudged. :) By all means, use your favorite essential oil if you'd rather avoid the synthetics!
UPDATE:
I've also made this using various essential oils. I really like citrus oils...lemon, lemon & lavender, lemongrass, or the Citrus Bliss blend from doTERRA smell wonderful.
Works very well and still smells good! 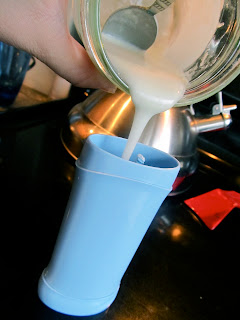 Pour into a cleaned out deodorant container (fyi, these containers are SUPER hard to clean out!! Deodorant is NOT made to be washable, and the left-over gunk in the containers stays true to it's original purpose!! After trying every soap and cleaner I could find, the thing that worked best was pouring some GooGone into the container, putting the lid on, shaking it up, and letting it sit for awhile. Then I rinsed it out and washed it with soap...the GooGone took most of the leftover deodorant right out!!) 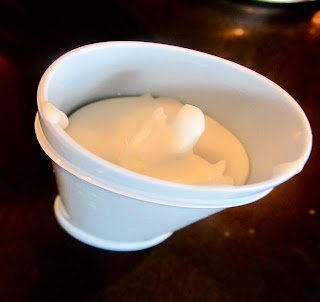 I actually made a smaller version of this recipe (I think I did 2 tablespoons of the main ingredients instead of 3, and pared everything else down accordingly), but it didn't make quite enough to fill up my container, so I would go with the 3 tablespoons recipe. :) Let the deodorant harden either at room temp or in the refrigerator until it's solid all the way thru. 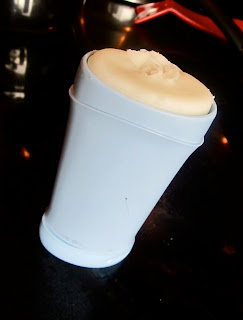 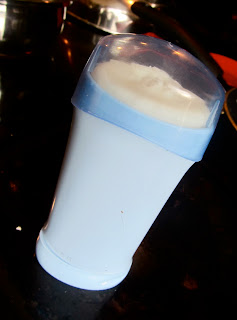 And there you have it! I haven't had any problem with this melting at room temp...you might have to keep it in the fridge if you house is really, REALLY warm, but otherwise it should be fine at room temp. :) I've been wearing this deodorant exclusively for the last couple of weeks and although we haven't exactly been in the middle of our warmest weather, I've been in some situations where I've definitely been able to put this to the test (UPDATE: It's been a fairly hot summer so far, and I've been gardening. I'm still using my homemade deodorant. Case closed). :) I have worked up a sweat but this kept me 100% BO free, and I feel like it worked better as an antiperspirant than my commercial deodorant! That was a surprise as I didn't expect it to do much as an antiperspirant...but it worked well for me! The first few times I used it, it felt really dry and itchy when it went on...I started rubbing a drop of either castor oil or sweet almond oil over the surface before applying the deodorant...I only do that every few uses, and it took care of the dry feeling (UPDATE: As mentioned in the ingredients list, slightly upping the amount of castor oil in the recipe helps get rid of this feeling). :) Don't screw it up very far before applying, as it gets soft with your body heat and you may wind up getting on a lot more than you wanted. :)