We've gone thru many, many tubes of Desitin in this house since having children. For some reason my kids seem to be prone to diaper rash...not that they have them constantly or anything, but we've dealt with our fair share. I've tried a few other kinds of diaper rash creams, but Desitin has been the only thing that really worked for us. However, I really do NOT like Desitin. I mean, it works well, but it's white. And it stains anything and everything it touches. We have so many white smudges on our bedspread...and that stuff gets under your fingernails and won't come out....sigh. When I came across this recipe for a diy "baby butt balm" I decided to give it a try and see if it would work. I don't cloth diaper, but this recipe is safe to use with cloth diapers. 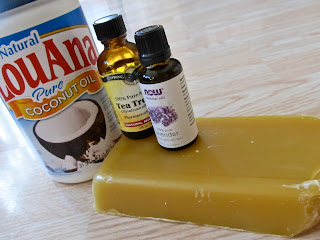 I slightly altered the original recipe because I wanted something a little less greasy, and then halved it. Here's my recipe: 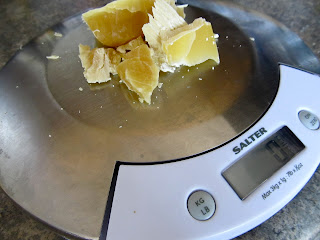 Weigh your beeswax. I cut small chunks off my bar of beeswax, and then once it was weighed I crumbled it into smaller pieces so it would melt faster. You can also use beeswax pellets/pastilles or grate a bar. 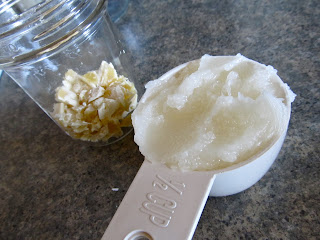 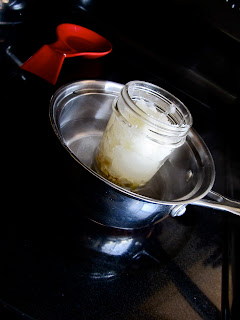 To melt, boil water in a small pan and set the jar into the water. Stir frequently. 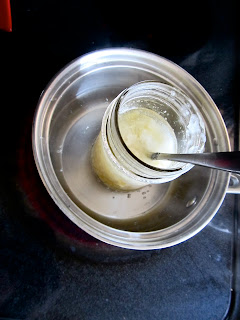 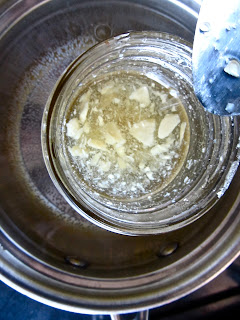 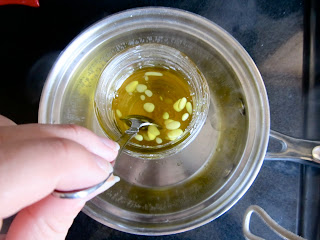 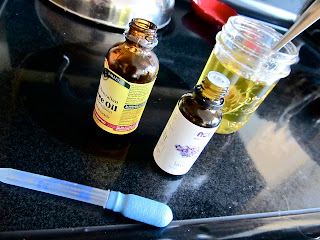 Once it's all liquified, remove from the boiling water and add the essential oils. Stir well. 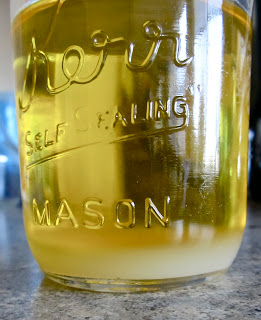 I let mine set up in the jar, but next time I think I'll pour it into the final container while it's still liquid. 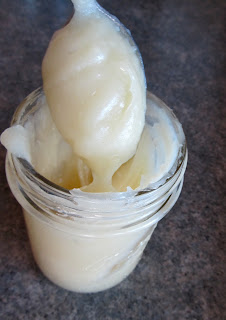 Stir once in awhile while it cools. It has such a nice, smooth, glossy texture. :) 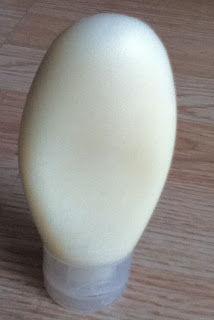 I was going to keep it in the jar, but when I found this empty squeeze container at Walmart I thought this would be much more convenient. 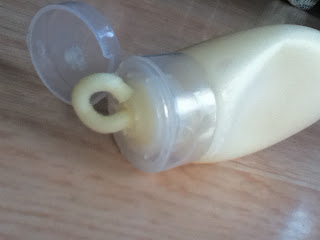 It has a great texture...firm enough to handle, but it melts into a nice, clear, oily/waxy coating on the skin. I've been using it for some minor redness but until last night I hadn't tried it out on a real diaper rash. Last night we had a nasty one, so I put the balm on thick and the rash was almost completely gone this morning! Keep using at every diaper change while there's any remaining redness. I love this balm...it's cheap, it's natural, it's non-toxic, and it smells good. :) You can also use this for cuts, scrapes, burns, or just dry skin!

Here's a breakdown of why these ingredients were used, borrowed from SimplyRealMoms.com:

Coconut Oil: Antibacterial, anti-fungal, anti-inflammatory, anti-microbial/infection fighting, antioxidant, has no harmful or discomforting side effects and is non-toxic to humans and animals. It is soothing and nourishing to an angry baby butt and is safe for cloth diapers.

Beeswax: Used to thicken the salve and form a nice breathable barrier on baby’s bottom. Excellent emollient and support for moisture. It protects skin from damaging environmental factors and is anti-inflammatory, antibacterial, anti-allergenic, germicidal and has antioxidants.

Tea Tree Oil/Melaleuca: Used for it's analgesic, antibacterial, anti-fungal, anti-infections, anti-inflammatory, antioxidant, antiseptic, and tissue regeneration properties.  It will soothe skin and promote healing as well as killing any bacterial, viral, fungal or yeast infection in the area.

Lavender Oil: Lavender has many benefits, some of which are: analgesic (reduces pain), anti-fungal, antihistamine, anti-infectious, anti-inflammatory, antimicrobial, antiseptic, regenerative and sedative oil. It fights any infection in the diaper area and soothes damaged, sore, red and angry skin. It also encourages cellular regeneration and healing. The scent is calming to you and your child helping release emotional and physical tension associated with the rash.