I like pretty-smelling body wash, but I hate paying $6 a bottle just to smell good. : \ So when I found this blog post via Pinterest, I decided to give homemade body wash a try. This can also be used as liquid hand soap). 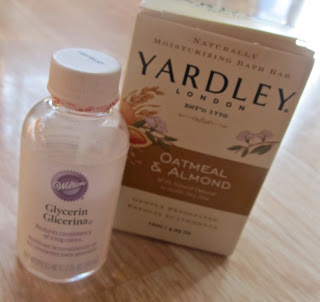 You only need two ingredients (Well, and water. But who counts water??). A bar of soap (I used 97 cent bar of Yardley Oatmeal & Almond from Walmart - which smells HEAVENLY, by the way - and it worked well!), and glycerin. Glycerin can usually be found with skincare in health food stores, near bandaids in drugstores, or where I found mine, Amazon.com. :)

For this recipe I used a 4oz bar of soap, so make sure to check the weight of yours. If you have an 8oz bar, double the recipe. I've heard rumors that Dove bar soaps do not work with this recipe (they won't gel), so I would avoid using those. :) 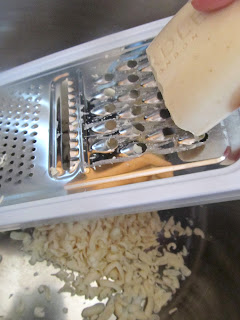 First, grate the bar of soap. I'm starting to think (after all the grating I've been doing lately!) that a small food processor may be in order. :) 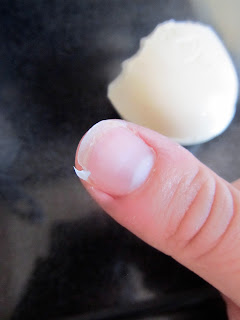 Be careful that you grate ONLY the soap. Don't grate your fingers, or finger nails. That would be a dumb idea. 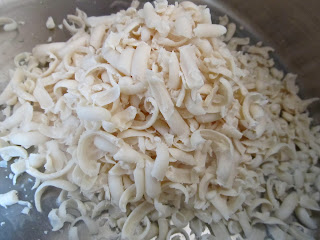 Once the soap is all nicely grated, put it in a good sized pot and add 8 cups of water and 1 tablespoon of glycerin. 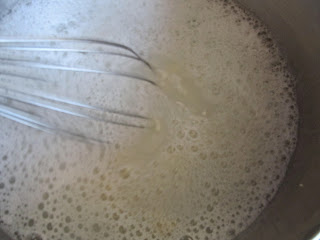 Heat over a medium-low heat, stirring often, until all the soap is dissolved. Do not allow the water to boil as your soap may crystallize. Remove from heat and let it sit undisturbed for 10 - 12 hours. I just covered my pot and went to bed. :) 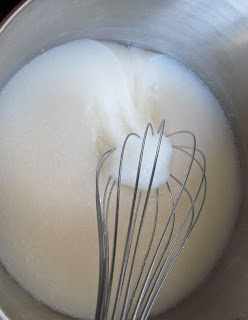 This is what I found in the morning! :) 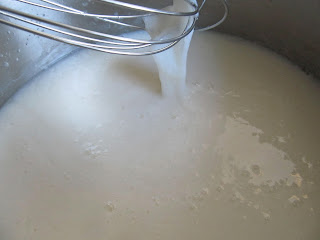 Using a whisk or a hand mixer, whip up the soap. If you want you can add some extra water for a smoother consistency...I would do this especially if you plan to put it in a pump bottle to use as hand soap. I will warn you...this soap doesn't really lather, and it has a kind of slimy consistency. It was weird to me at first, but now I don't really notice it. :) I still come out clean, so I guess it's a success. 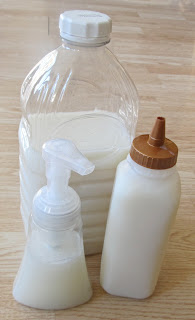